1. Avoid slang terminology. Imagine writing a paper for someone from a different country. That person may not be familiar with slang terms that are used in conversational language.

Example 1: Mark knew how hard it was to get clean after being addicted to drugs for 5 years.
Example 2: Julie was a typical girl next door, and everyone loved being around her.
Example 3: My grandfather was out there, so we didn’t stay very long, in case he was going to do something crazy.

Shameless plug:  Grammar errors can be difficult to spot.  Use our free online grammar check to catch these mistakes before your readers do.


2. Never use quotation marks for apologetic reasoning or for terms that are being defined.

Example 1: They were told to stop the party because they were “disturbing” the neighbors.
Example 2: Michael Jackson referred to himself as the “King of Pop.”
Example 3: “Photosynthesis” is defined as the process of converting light energy to chemical energy and storing it in the bonds of sugar.

The use of quotation marks in these sentences makes them seem weak. Only use quotation marks when actually quoting someone else’s work, and always cite your reference(s).

If you want to put emphasis on a word, you should italicize it to make it stand out. 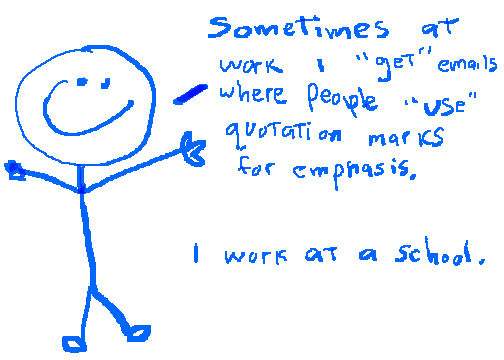 3. Avoid excessive use of commas and semicolons. These punctuation marks can be very effective, but when they are used too frequently, the paper will not flow easily for the reader.


4. Follow the words this, these, and those with the actual element to which you are referring. Otherwise, don’t use them.

Example 1: The coaches of the baseball team knew each player’s strengths. These strengths helped them win the game.

If I would have left strengths out of the above sentence, it would have been unclear whether I wanted to draw the reader’s attention to coaches or strengths.

Incorrect: On Thanksgiving, Susan’s family eats turkey for lunch, watches a movie on television, and plays games all evening. This is her favorite part of the holiday.

It is unclear which part of Thanksgiving is Susan’s favorite. The sentence could have been: Playing games is her favorite part of the holiday.

Sometimes it is more appropriate to take the words this, these, and those out of the sentence completely. They can make the author appear to be confused or have a lack of direction in his or her writing. Replacing this with playing games made the sentence stronger and more focused.

a. Between two independent clauses (complete sentences) without using a coordinating conjunction (and, but, so, or, nor, yet):

Example 1: I went to the mall to buy clothes with my credit card; all of the stores that I visited would only take cash.

A semicolon is followed by a space and a lower-case letter, unless the second independent clause starts with a proper noun. Both sides of the semicolon should be complete sentences that relate to each other.

Incorrect: My sister loves taking her kids to the beach; where they can swim in the ocean.

In the sentence above, a comma should have been used instead of a semicolon, because the second clause is not a complete sentence.

Incorrect: Mark has three dogs; and he named them after The Three Stooges.

In the sentence above, the word and should be removed. The semicolon takes the place of a coordinating conjunction. The use of a comma would be appropriate with the word and.


6. Transition words should only be used at the beginning of a sentence or immediately after a semicolon.

Example 1: Plato was Aristotle’s teacher; however, Aristotle disagreed with many of Plato’s ideas.
Example 2: News reporters were at the scene of the crime. Consequently, the public knew about the robbery within minutes after the incident took place.


7. Avoid using the words such, like, and a lot whenever possible. Find other words in a thesaurus that can replace these words. A free thesaurus can be found here.

8. Do not begin sentences with coordinating conjunctions (and, but, so, or, nor, yet). These words should only be used to connect two independent clauses. One way to check if you are using them correctly is to see if any of these words are capitalized within your paper. They should always be written in lower case.


9. Avoid starting many sentences with the word because. It is okay to use this word in the beginning of a phrase to introduce a new topic, but seeing it throughout a paper can make it difficult to grab the reader’s attention.

Example 1: Because felony offenders are unable to vote, they feel that they are not treated fairly after being released from prison. Because the majority of the public agrees with the law that prohibits them from voting, the prisoners will not be able to vote anytime soon.

Example 2: Due to the fact that felony offenders are unable to vote, they feel that they are not treated fairly after being released from prison. The prisoners will probably not be able to vote anytime soon, because the majority of the public agrees with the law that prohibits them from voting.

The second example looks more professional and doesn’t seem to be as repetitive.
Posted by Hannah at 12:57 PM